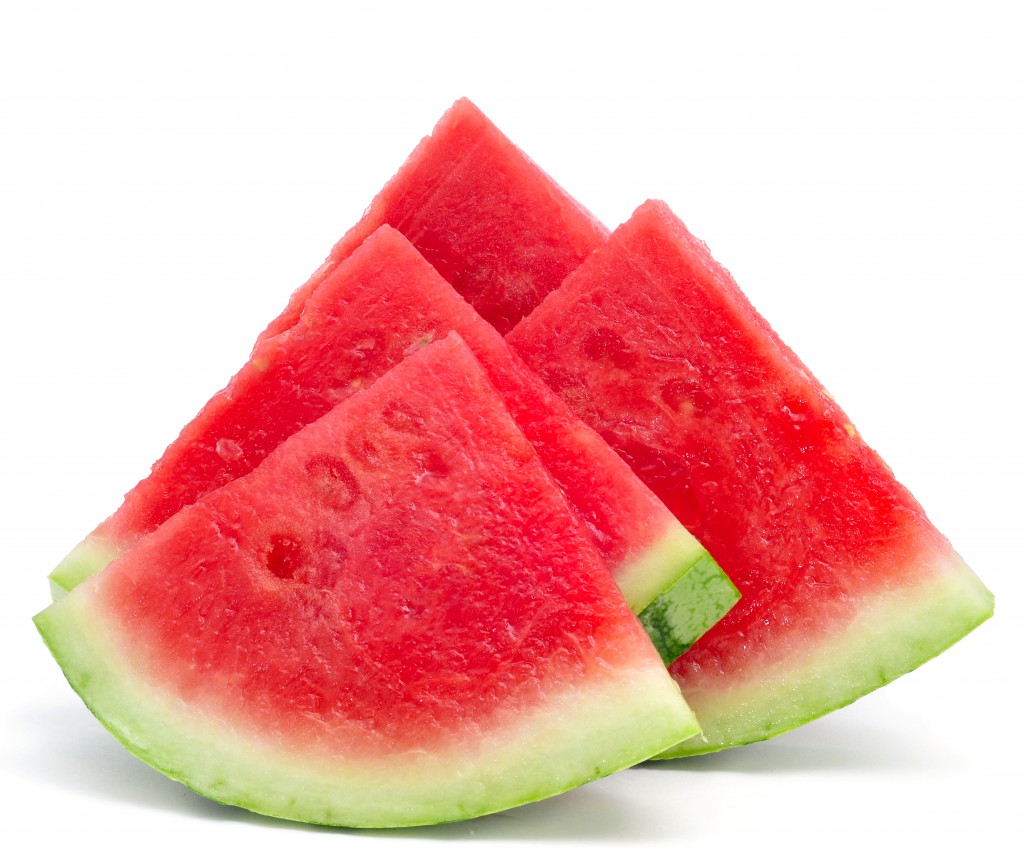 Everything You Need to Know About Watermelon

Watermelon may be the quintessential summer fruit – but keep in mind it is actually available all year. This sweet and crisp fruit is refreshing, hydrating, filling and great for recovery after exercise. Its peak season is May to October. In Ontario, the local season is between late-July and September. 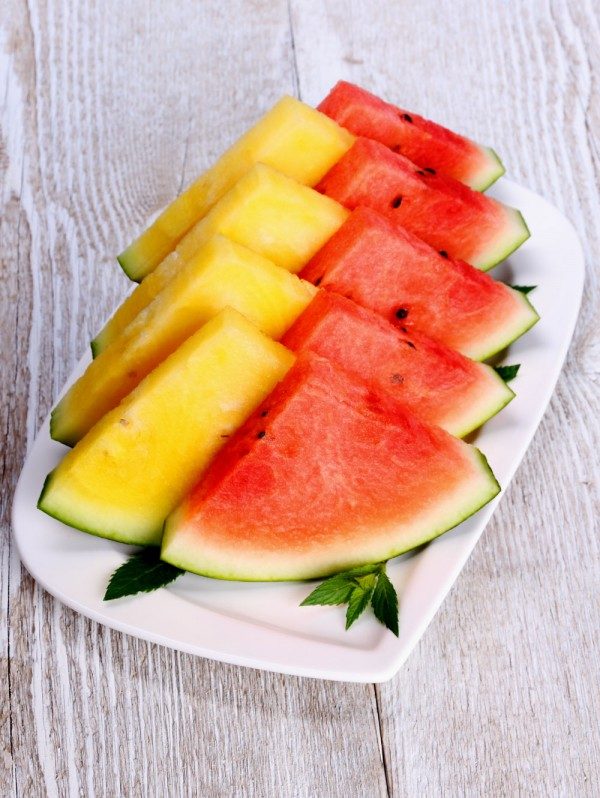 Seeded watermelons are oblong with firm brown, or black, seeds and red flesh.

Mini watermelons are smaller than seedless, but still round, and come either seedless or seeded.

Yellow watermelons are large and round, tasting the same as the red variety.

How to Select and Store Watermelon

Watermelon is 92% water so it should feel heavy. Look for a melon that’s symmetrical and firm with no significant dents, bruises, or cuts. The bottom should have a creamy yellow spot from where it was sitting in the sun to ripen. Usually mini watermelons will not have a yellow sun spot.

To Freeze Watermelon: cut into 1-inch squares and place in a freezer bag. Because watermelon is 92% water, it freezes very well. For a cool summertime treat, freeze the cubes for an hour or two and serve immediately. Or allow to freeze completely, then use as “ice cubes” which add flavour to water and fruit drinks. You can also puree leftover watermelon and freeze it into popsicles, either with or without yogurt.

Keep in mind that the freezing process can dramatically change the texture of watermelon after you thaw it. Therefore, it is not recommended that you freeze watermelon for longer than a couple of hours if you want to enjoy it whole. However, frozen watermelon can be blended into smoothies and drinks. 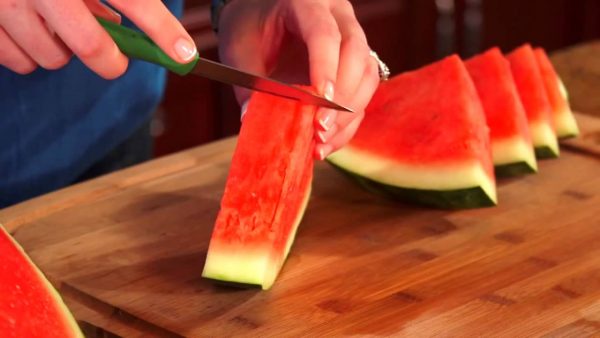 How to Prepare Watermelon

Clean the outer rind with cool water. Use a large knife to split the melon in half, then quarters, then start cutting into wedges.

Another way is to split the melon in half and use a melon baller to scoop out balls of the watermelon flesh. You can also slice off opposite ends of a watermelon and stand it up on its flat side. Shave off the rind now that the melon is stable, then cut into cubes, plate-sized coins (makes for impressive presentation), or even rind-less wedges. Here’s a handy video showing cutting tips from the National Watermelon Promotion Board. 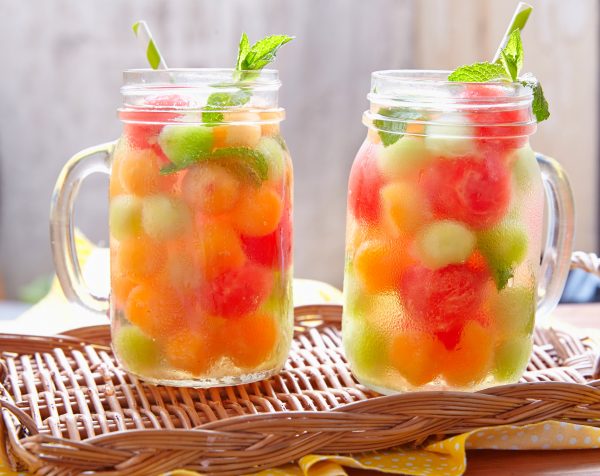 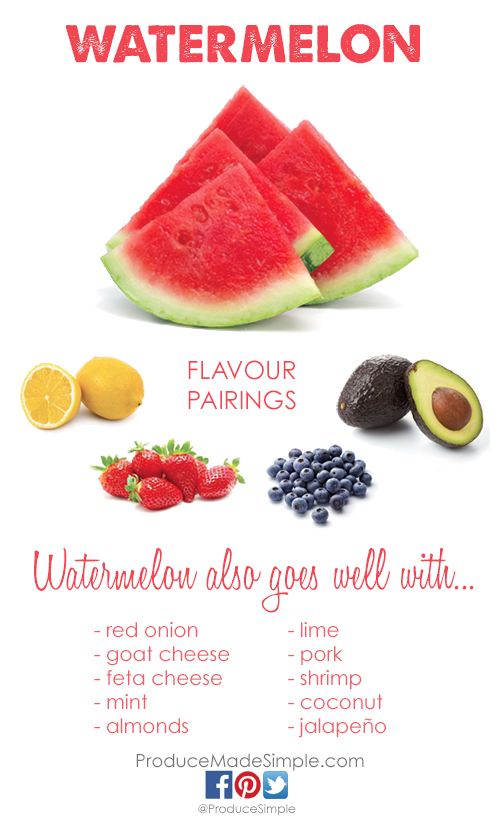 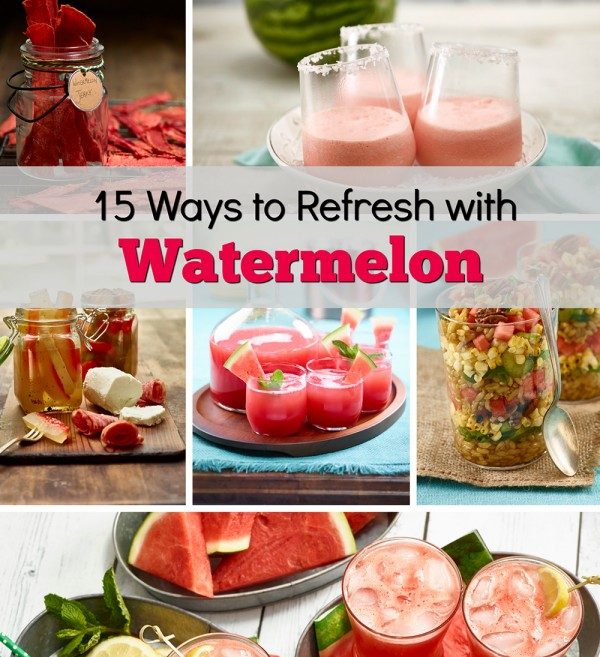 Watermelon carvings are fun way to use watermelon. You can get as creative as you want with this easy-to-shape fruit.

If you’re not feeling artistic, you can still make a beautiful presentation with watermelon by using it as a bowl. Carefully scoop out the melon from one half of a watermelon and use this as a bowl. Before you fill it up, cut a small slice off the bottom of the “bowl” to keep it flat and level. Add cantaloupe, honeydew and watermelon balls to the bowl for a fun presentation. Toss in some berries, almonds, or even coconut flakes for a colourful, healthy and tasty salad.

Try grilling your watermelon. The heat caramelizes the natural sugars in watermelon, which adds complexity to the flavour.

Add watermelon cubes to kebabs – for a snack or the grill!

Another refreshing way to use watermelon is to blend it an Agua Fresca, with a little lime juice and liquid sweetener. You can serve it over ice on its own or even turn it into a cocktail or spiked watermelon balls for the adults.

Watermelon coconut froth will have you dreaming of lazy afternoons of the beach. Both kid and adult approved!

For more delicious ideas on how to enjoy this fruit, check out 15 Ways to Refresh with Watermelon.

Kick up your next BBQ with watermelon! Get inspired with this BBQ roundup!

According to watermelon.org, the first cookbook published in the United States in 1796, American Cookery by Amelia Simmons, contains a recipe for watermelon rind pickles. A delicious way to reduce waste, these will be a hit on your summer table.

Make crazy cutouts with ½-inch thick slices of watermelon and assorted cookie cutters. Cut out letters, numbers, shapes, and so much more. Be as creative as possible! 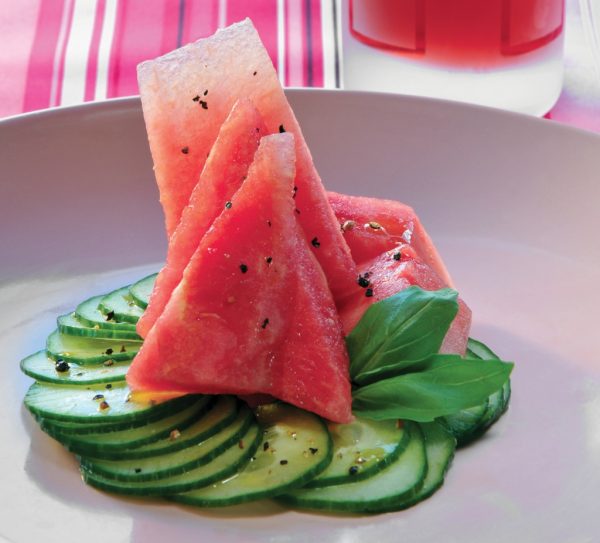 According to the Canadian Nutrient File, a 2-cup (500 mL) serving has just 80 calories and 0 fat!

Did you know that watermelon is hydrating and full of antioxidants? Watermelons are made of 92% water – hence the name. Eating a generous slice of watermelon is similar to drinking a glass of water.

Due to their red hue, watermelons are a lycopene leader in produce (18.16 mg per 300 g)! Lycopene is reported to be an important antioxidant that protects cells from oxygen-related damage that can result from regular cell functions. Watermelon is an excellent source of an amino acid called citrulline, which helps to maintain blood flow within the heart. Watermelon contains 672 mg citrulline per daily recommended serving and is the primary source of citrulline in fruits and vegetables. Increased consumption of citrulline can help maintain cardiovascular function. The body uses citrulline to make arginine, which plays a key role in cell division, wound healing and the removal of ammonia. Watermelon’s citrulline is abundant and readily absorbed by the body. Watermelons are chock full of vitamins and minerals too! Based on a 2-cup (500 mL) serving, watermelon provides:

Get our weekly recipes straight to your inbox! 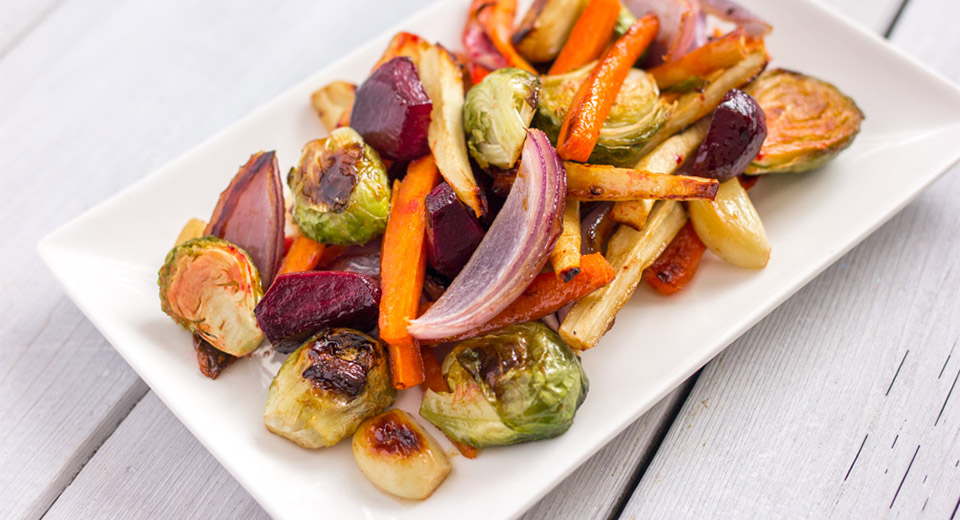 Join our Community of Cooks!

Receive our weekly newsletter and be the first to know about new seasonal recipes, tips from chefs, dietitians and food writers - and contests!